My wonderful Pitchwars Mentor, KT Hanna, is about to launch her new book, and today it's the cover reveal, with a sneak-peak below, and a link to see the full thing (not forgetting those essential links to pre-order it). So here we go:

Hybrid is finally almost ready for release. S.P. McConnell worked magic again here.
Hybrid (The Domino Project #2) is the sequel to Chameleon. It's set in the wasteland of earth after a meteor shower causes ecological disaster, damages the atmosphere, and gives the gift of an alien parasite to the world. Book two furthers Sai, Bastian, and Dom's journey in their fight to live free from GNW imposed rules.
The goodreads blurb is as follows:
As Sai recovers from her life-threatening injuries, she struggles to piece together her damaged relationship with Dom. He fights the parasite within, suddenly freed from the interference of the other Dominos in his head.
Inside Central, Bastian’s Shine dosing has become a dangerous dance. Enhanced security protocols and endless meetings have him on a tightrope, with little room to move without revealing himself. When the GNW release the Damascus to begin their systemic hunt of the Exiled, the noose closes around the rebels and their allies. If they can’t disable the threat, the Exiled won’t be the Damascus’ only agenda

Without further ado - here's a teaser of the cover by the amazingly talented S.P. McConnell. 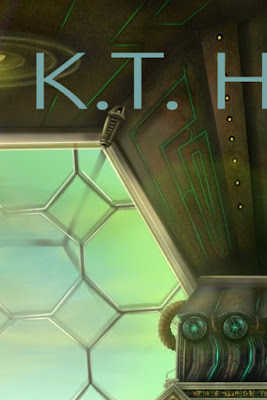 Go see the full cover at YA Interrobang!

It will also be available in print via CreateSpace, Amazon, but best of all, the local indie store is being really supportive and already has it available for pre-order in print there!

KT Hanna has a love for words so extreme, a single word can spark entire worlds.
Born in Australia, she met her husband in a computer game, moved to the U.S.A. and went into culture shock. Bonus? Not as many creatures specifically out to kill you.
When she's not writing, she freelance edits for Chimera Editing, interns for a NYC Agency, and chases her daughter, husband, corgi, and cat. No, she doesn't sleep. She is entirely powered by the number 2, caffeine, and beef jerky.
Note: Still searching for her Tardis

To celebrate, we're giving away a copy of books 1 & 2! With an Amazon e-card, and a SWAG pack!
Winners will be announced on Monday October 19th!
a Rafflecopter giveaway
Posted by DavidG at 09:28