If we look at the politics surrounding disability in the over the past couple of months, then some of the decision-making seems disturbingly irrational, or worse, disturbingly rational.

The Bedroom Tax stands as one of the most openly unpopular measures adopted by the Coalition, people can understand that demanding families move to smaller accommodation when that smaller accommodation simply doesn’t exist is not simply unfair but outright wrongheaded. And the unpopularity of the Bedroom Tax is not simply a theoretical consideration, the Poll Tax caused rioting in the streets and destroyed a previous Tory government. In that situation, and with growing media focus on the Bedroom Tax,  it was politically important to dress up it up in as much goodwill as possible, yet the Department of Work and Pensions went all the way to the Supreme Court, refusing only at the last hurdle of letting the case go to trial, to try and force two children with very different disabilities to share a bedroom; and while they may finally have backed away from being seen to bully disabled children over a bedroom, they did not back away from insisting that if an adult couple could not share a bedroom due to disability, then they would be considered to be under-occupying.

Equally the last few weeks have seen Iain Duncan Smith, his junior ministers, and the Tory Party Chairman Grant Shapps all laying into disabled people in the tabloids, the broadsheets and on TV with claims that ‘a million of them could work’ (IDS), that ‘they get better’ (Esther McVey, Minister Against Disabled People), and that the Work Capability Assessment has scared hundreds of thousands of scroungers away from claiming Employment and Support Allowance (Shapps). The political need to demonise disabled benefit claimants has passed, the Welfare Reform Act is law, the slashing of disability benefits is a fait accompli, there is no more ground to be gained in Parliament, but the demonization continues on. The only conclusion that can be drawn is that Tory Central Office thinks there is something to be gained for the local council by-elections happening tomorrow, and that they make that gain not by any specific political aim, but simply by demonising us.

And isn’t that an unpleasant fact to face, that as disabled people we are now so unpopular that simply attacking us may incline people to vote in a specific way. 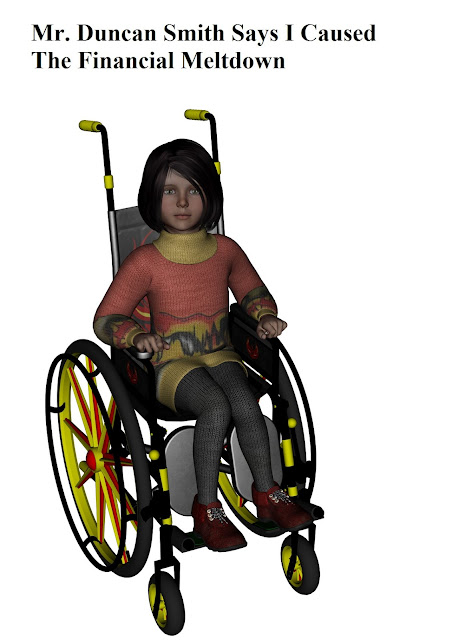 [Photo: Computer generated image of a small child in a wheelchair under the legend 'Mr Duncan Smith says I Caused the Financial Meltdown']